Thank you for considering the Sievering Clinic. If you feel that one of our treatments might benefit your health or appearance, please call us for evaluation.

A wide variety of methods have been used over many decades for treatment of haemorrhoids. Injection sclerotherapy, infrared and laser photocoagulation, cryosurgery, direct application of electrical current, and rubber band ligation all lead to ablation of haemorrhoids unresponsive to conservative management. 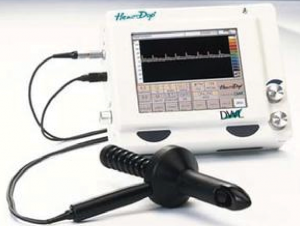 All patients should undergo flexible sigmoidoscopy or colonoscopy to exclude other causes of bleeding per rectum.
All patients must be educated about the procedure and give informed consent prior to treatment.
Patients do not need to discontinue the use of aspirin or other non-steroid anti-inflammatory medication before the procedures. After the endoscopic examination, patients are treated if grade 2 or larger internal haemorrhoids were present. The dentate line in the anal canal is identified, and ligation under suction is performed 2 to 5 mm above the dentate line. All ligations were performed in the outpatient setting. Safety data are recorded; all events are documented in the report given to the patient. 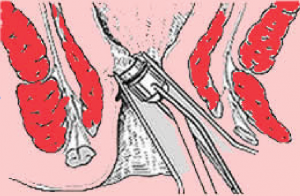 Patients are seen 4 to 6 weeks later and then at 2 months interval if necessary. If residual haemorrhoids are noted or symptoms persisted, further treatments were conducted monthly. The end point of treatment is to achieve grade 1 haemorrhoids.
Serious complications, such as life-threatening massive bleeding and sepsis, are extremely rare, but cannot be fully discounted. Videoendoscopic anoscopy and a single-handed ligator compared favourably with traditional haemorrhoid banding by anoscopy. Video endoscopic techniques are preferred in the office setting.